The first BioGaps Scorpion Fieldtrip was conducted during from 17 to 28 February, 2017, by Lorenzo Prendini, Curator of Arachnida and Myriapoda at the American Museum of Natural History, New York, and field assistant, Reginald Christiaan, from Soebatsfontein, Namaqualand, Northern Cape. The trip was planned for the period between last quarter and first quarter of the lunar cycle in the summer, usually a time when scorpions are active and abundant at night in the Karoo.
Eleven compulsory 1 x 1 km2 sample sites were surveyed for scorpions. In an effort to collect scorpion species within pentads that were not found in the eleven compulsory sites, another twelve sites, falling within the eleven compulsory pentads and one noncompulsory pentad, were sampled in addition. Therefore, 23 georeferenced sites were sampled in total.

Collecting was conducted at night with ultraviolet (UV) light detection, and augmented by rock-rolling and burrow excavation during the daytime. UV light detection involves walking and scanning the ground with powerful long-wave UV-emitting LED flashlights. Work began at sunset and continued until midnight or later (ca. 2 am), depending on scorpion surface activity and weather conditions. Each sample site was traversed twice by both investigators, walking in different directions. All scorpions observed were captured with forceps and preserved directly in bottles of ethanol. Tracks walked within the compulsory sample sites were recorded with GPS.

Prendini and Christiaan camped out within many of the sample sites because this was more convenient for collecting throughout the night. However, in some cases, they stayed in nearby accommodation, mostly provided gratis by the landowners. At two farms, they camped overnight in a large skuur (shed) to avoid heavy rainfall. Landowners were very hospitable and interested in the project. Several invited Prendini and Christiaan in for coffee or dinner. Two couples accompanied the investigators into the field to collect scorpions at night! Unfortunately, cold and/or rainy weather on several nights, as well as extremely dry conditions following a prolonged drought across the western part of the Karoo, reduced the number of specimens collected to lower levels than expected. Scorpions were more abundant further east (notably in the Victoria West District), following recent rains.

The count of species collected per pentad varied from three to eight (average five), which is typical of the Karoo, based on a decade of research in the region by Prendini. Therefore, in spite of the weather, it appears that all or most of the species present in each pentad were recorded. The most diverse pentad, with three genera and eight species, was 3105_2245 (Biesiebult). This pentad included a considerable range-extension for Parabuthus nanus, previously known only from Bushmanland and southern Namibia. The diversity of this pentad may be attributed to the heterogeneity of the landscape, which provides a range of different habitats for scorpions, including rocky hills, sand plains, and clay pans.

Altogether, the identified material collected across the 23 sites and twelve pentads comprises sixteen species, in two families and three genera, i.e., two genera and eight species of thick-tailed scorpions (Buthidae: five species of Parabuthus and three species of Uroplectes) and eight species of burrowing scorpions (Scorpionidae: Opistophthalmus). The trip resulted in 106 presence-only records. Among the highlights were a possible new Opistophthalmus species and one of the smallest species of South African scorpions, Uroplectes ansiedippenaarae, both collected in the Tankwa Karoo. 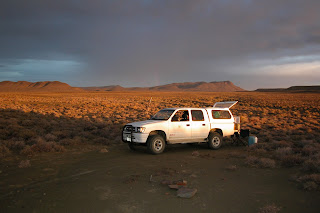 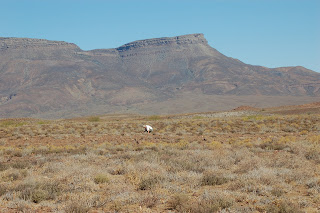 Searching for scorpions in the Karoo 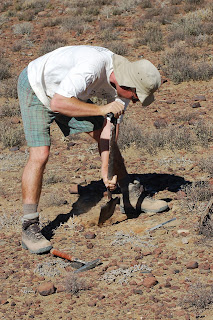 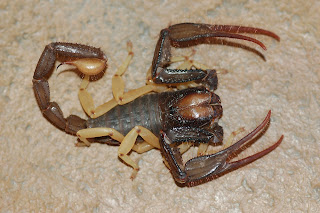 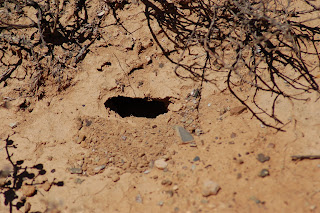 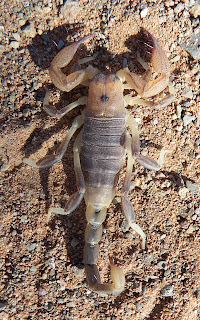 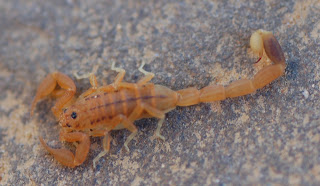 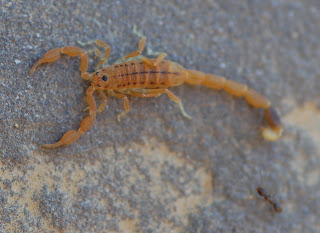 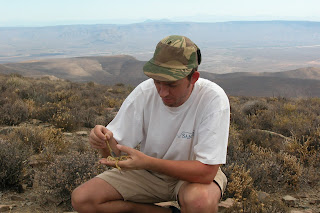 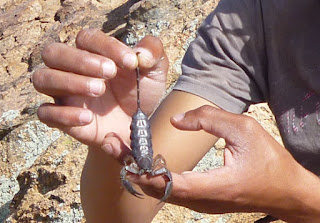 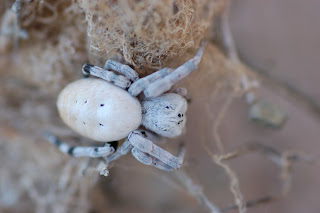 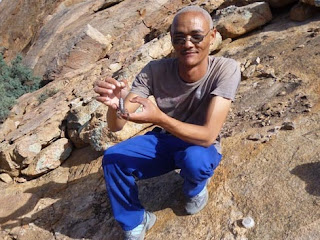 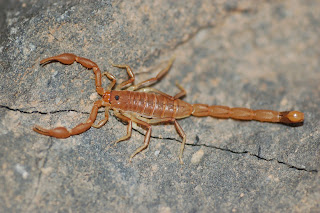 Posted by karoo biogaps at 01:39 No comments: